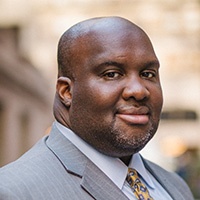 Attorney Wilson is originally from Long Island, NY. He graduated with a B.A. in Professional Legal Studies from St. John's University in 2000. Shortly thereafter he joined Early, Lucarelli, Sweeney & Meisenkothen as a paralegal. While working, he attended law school in the evenings at Touro College Jacob D. Fuchsberg Law Center. While attending Touro College Jacob D. Fuchsberg Law Center, Attorney Wilson was a managing editor of The Journal of Race Gender and Ethnicity. He also was the evening vice-president of the Black Law Student Association, where he participated in the Frederick Douglass Mock Trial Competition for two consecutive years and coached teams thereafter. Attorney Wilson graduated law school in 2007. He is a member of the bar and is licensed to practice in the states of New Jersey and New York.