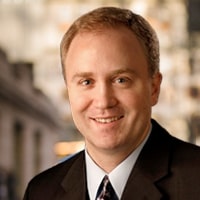 In 2011, Attorney Meisenkothen became a named partner in Early, Lucarelli, Sweeney & Meisenkothen. The highly regarded Super Lawyers rating service identified him as a "Rising Star" (2008-2012 — Products Plaintiff; click here for selection criteria). He has since been named “Super Lawyer” by the Super Lawyers rating service in recognition of the professional achievements that he has attained thus far in his career (2013-2015 — Products Plaintiff; click here for selection criteria). No more than 5% of the lawyers in any given state are awarded this prestigious designation. In recognition of his record of success in asbestos litigation in Connecticut, Chris was also chosen as one of the Connecticut Law Tribune's "Dozen Who Made a Difference" in 2012.

A Letter from Janette Gray

My family and I want to say a very heartfelt THANK YOU to you and the staff at Early, Lucarelli, Sweeney & Meisenkothen, for all you've done thus far on behalf of our father, Walter H. Gray.

We have peace in knowing how proud our father would be that you and the lawyers have fought on his behalf. All the hard work and long hours he endured has not been in vain. Even though our father was a regular man, whom had worked all his life, you have treated him the same as some of the others who lead a much different path than he did in life. The individuals who have had to battle this fierce disease, the mesothelioma make all workers the same. This disease took him in the golden age of life, it's coming up on a year the 11th day of April, seems as if it were yesterday.

The financial support has been a blessing to our family also. To help finish our father's affairs has meant a lot to us. He left us with the peace of knowing that his children would not have to bear a burden of trying to make ends meet because of him.

Form our hearts, again we say THANK YOU and may God bless everyone at the firm who fights for those who have lost to mesothelioma. But most of all for those who continue to fight and fight until the end.

Chris, there aren't words to write that can express our gratitude. We do hope and pray blessings and favor be bestowed on you and your family for all you've done for the late Walter H. Gray. My family and I are truly blessed and grateful for you.