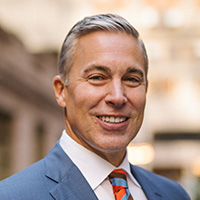 Brian is the managing attorney of the firm’s New York City office where he concentrates his practice on representing mesothelioma victims and their families. He serves as a Liaison Counsel to the court in the New York City Asbestos Litigation. Brian has been an invited speaker at conferences on asbestos litigation. He is a member of the bar of the states of New York, California, and Connecticut and of the District of Columbia. He is admitted to practice in the United States District Courts in the Southern and Eastern Districts of New York. He is also a member of the American Bar Association and the New York State Bar Association. Outside of his law practice, Brian is involved with Riprap Friends (https://riprapfriends.org/), an organization that supports pediatric oncology patients.

A Letter from Donald Fischetto

I am writing this brief letter to let you know how pleased I am with the work you and your staff in New York has accomplished on my case. I initially had my doubts about filing a lawsuit. The process appears intimidating, and I constantly hear horror stories about lawyers, who are out to make a quick buck at the expense of their clients. After dealing with you and your law firm, I know that you are tremendously ethical and accomplished mesothelioma lawyers. Any phone call I made to your firm was responded to, and any question I had was immediately answered.

The results of my case speak for themselves. Dealing with my infliction has been very difficult, but you have given me a little bit of peace. I can honestly say that there is no finer law firm out there than your company. Thank you for all you have done.